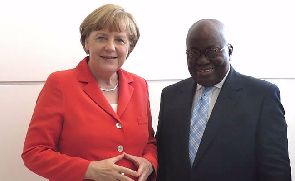 The President of the Republic, Nana Addo Dankwa Akufo-Addo, says German conglomerate – Siemens AG – which is the largest industrial manufacturing company in Europe, will soon announce its decision to establish its presence in Ghana.

The President stressed: “The decision by Siemens and that of German car manufacturing giant, Volkswagen, to establish an assembly plant in Ghana soon are testament to the efforts government has put into creating the necessary environment for the private sector to flourish”.

“We are not resting on our oars. We will continue to work hard to attract investments, domestic and foreign, into Ghana so that we can unleash the sense of enterprise, creativity and innovation of the Ghanaian people and help build a progressive, prosperous Ghana, whose citizens live in harmony and security,” he said.

President Akufo-Addo made this known on Tuesday, 30th October, 2018, when he delivered his remarks at the ongoing G-20 Compact with Africa Conference being held in Berlin in the Federal Republic of Germany.

Additionally, at the Conference, Hamburger Leistungsfutter (HL) GmbH, a leading manufacturer and supplier of specialist feeds and compound feeds in Germany, signed an €8 million agreement to invest in Ghanaian company – Agricare Ltd.

The investment from HL Hamburger into Agricare comprises full technology transfer in animal feed formulation and sales and also it will help Agricare utilise more local raw materials in the formulation of feeds.

Whilst commending the German Chancellor Frau Angela Merkel for convening the conference, the President indicated that Ghana is delighted in Germany’s decision to re-orient its policy and relationship with Ghana, and, indeed, with Africa from one based on aid to relations, focused primarily on trade and investment co-operation.

“My government’s vision of moving our country to a situation beyond aid, i.e. a ‘Ghana Beyond Aid’, is aligned to Germany’s Compact with Africa programme. Under my leadership, we are determined to discard the mindset of dependence on aid, charity and handouts, and aim towards becoming self-reliant, within the context of strong global co-operation,” he said.

President Akufo-Addo continued: “We are well aware that in order for Ghana to harness the full benefits of the Compact Programme, whose objective is to ensure more private sector investments, we have to get our acts together. We have to create an enabling environment for investments in Ghana, not just to survive, but to thrive.”

“It is for this reason that my administration has spent the last 21 months to improve the fundamentals of the Ghanaian economy, because we believe that an improved macro-economy is a basic requirement for stimulating the investments we need for the significant expansion and growth of the national economy, and the generation of wealth and jobs.”

Additionally, the President indicated that his administration has initiated and implemented policies that are encouraging and empowering the private sector to grow the Ghanaian economy within the framework of macroeconomic stability.

“We believe that when the private sector flourishes, and when our enterprises become competitive, not just on the continent, but also in the global marketplace, then can we create the thousands and thousands of jobs our teeming masses of unemployed youth crave for,” he added.

Concluding, President Akufo-Addo used the occasion, on account of the news of her impending departure from the German political scene, to congratulate Chancellor Angela Merkel on the exceptional quality of her leadership of Germany and Europe for a decade and more.

“The Ghanaian people and I will regret her departure very much, for she has been one of the most outstanding leaders of modern times. We shall miss her very much,” the President lamented

Asamoah Gyan Files a Divorce Against His Wife

I Will start managing new artists next year – TicTac