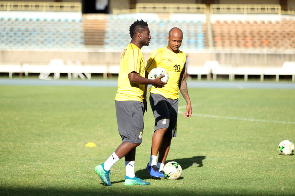 The crucial meeting will take place at the Jubilee House at 14:00GMT after the duo arrived in their native country following Ghana’s 2-0 win over Ethiopia in a 2019 AFCON qualifier.

The Ghanaian leader is determined to smoke the seeming tension between the two players and their allies over continuous banter over the leadership of the national team.

Both Gyan and Andre have consistently brushed aside claims of a power struggle in the team, but reports of disquiet between the two are just refusing to wash away.

Gyan, who is Ghana’s all-time top scorer, took the armband from Stephen Appiah.

But his reign has been punctuated with controversy amid claims Andre Ayew has been undermining him in the team.

It’s widely feared the tension between the two players could derail the team’s chances of ending a 36-year wait for an African title in Cameroon 2019.

Ghana President Nana Akufo-Addo will hold a meeting with the team captain and his deputy at the seat of government aimed at finding a lasting solution to the never-ending captaincy issue.