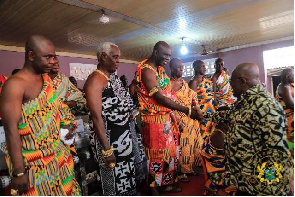 During a two-day working visit to the Western North region, President Akufo-Addo met with the Omanhene of Sefwi Wiawso Traditional Area, who praised the President as being “courageous” and a “promise keeper” for his government’s creation of a new region there.
“Many were those who did not believe in you, but you have proven to us that you are ?seade?y? (promise keeper),” said Katakyie Kwasi Bumangama II, on Wednesday. “You are a courageous leader. There aren’t enough words to describe what you have done for us,” the Chief added.
Advertisements
It took the appeals of 44 successive chiefs and their people in the enclave to be able to call a region their own, the Sefwi Wiawso Chief said. During a campaign stop in the region in 2016, the chief proposed the idea to the then-NPP flagbearer. “You indicated that if we voted for you, you will ensure that our request for the Western North region is granted,” Katakyie Kwasi Bumangama II said.
That request and its attendant promise were fulfilled when the President and his government concluded all the legal processes to see to the creation of the Western North Region.
The President followed that up with the presentation of a $20 million to spearhead the creation of the region, a gesture for which the chiefs were grateful and full of praise. “That is why we need not put undue pressure on you. We need to allow you to carefully nurture our region for us because you gave us the region, you can best develop it for us.
Advertisements
All that is required, we know you will provide,” the chief said on behalf of his people. He continued: “In fact, we had presumed that it [the appointment of ministers] will delay but due to your ever-prepared disposition [towards developing the region], you announced their [minsiterss’] appointments soon enough for us. You have appointed our most preferred candidate.
On Aboagye-Gyedu, Mr President, I know little of, but the Anhwiaso Manhene can vouch for him but Alex Tetteh [Deputy Western North Region Minister] is a man after my own heart.” As Akufo-Addo left the ceremony, he presented three Nissan Patrol vehicles and five pickup trucks, intended to be used by the Western North Regional Coordinating Council
.
Source: adomonline.com