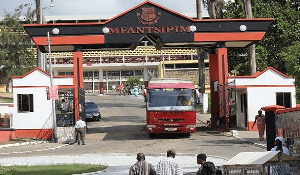 Some first year students and their parents who turned up at the Mfantsipim Senior High School (SHS) in the Central Region with their trunks and chop boxes on Sunday have been left stranded after they were turned away by authorities of the school.

The school’s authorities claim the students who were placed in the school under the self-placement module of the Computerised School Selection Placement System (CSSPS) were wrongly placed; thus they should go back home.

. One parent who spoke to Graphic Online said upon arrival at the school, authorities asked them to go back home because her son’s name was not on the list of students who have been placed at the school.

According to her, following her son’s placement, she picked up the prospectus last Wednesday and was asked to report to the school on Sunday. “My ward was given Visual Arts.

We came here on Wednesday after my ward was placed at Mfantsipim and they gave us a prospectus. We’ve sewn uniforms, bought all the items and now they are asking us to go back home. We won’t go,” she told Graphic Online.

“When we came on Wednesday, they took our phone numbers and so if anything at all, they should have called us or sent us messages to that effect. The number of students doing visual arts on the notice board is just 22 so parents suspect there is more to it than meets the eye. They say they are not admitting but we have been given prospectus since last week to report today only to be given this news,” she added.

Meanwhile, the Ghana Education Service (GES) says no student was wrongly placed by the CSSPS. According to the Deputy Director General in charge of Quality and Access, Kwabena Tandoh, students were placed according to their choice of schools.

In an interview, Mr Tandoh explained that students were placed by merit and thus it was impossible for anyone to complain that he or she was not placed in schools or programmes of their choice.

Subscribe to this blog for our daily updates and our news letter 📨 into your email 📧.