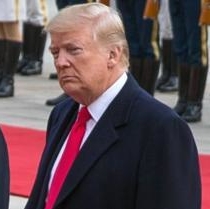 NEW DELHI — President Trump on Monday began a whirlwind visit to the world’s largest democracy by praising what he called India’s unity and tolerance, but offering no public critique of recent actions by Prime Minister Narendra Modi that have been widely condemned as discriminatory.

Amid pageantry and crowds that were enormous but apparently shy of the president’s predictions, Trump and Modi celebrated their warm personal bond and shared nationalist political philosophy while talking up economic and military cooperation that is a bulwark to China. Trump said a long-promised trade deal with India is in sight but he gave no date for completion.

“India is a country that proudly embraces freedom, liberty, individual rights, the rule of law, and the dignity of every human being,” Trump said. “Your nation has always been admired around the Earth as the place where millions upon millions of Hindus and Muslims and Sikhs and Jains, Buddhists, Christians, and Jews worship side by side in harmony; where you speak more than 100 languages and come from more than two dozen states, yet you have always stood strong as one great Indian nation. Your unity is an inspiration to the world.”

Trump returned to the theme repeatedly but did not mention Modi’s controversial citizenship law passed in December or the state of emergency his Hindu nationalist government imposed on Kashmir, India’s ony Muslim-majority state.

The references to India’s democratic political system and diversity were apparently meant to air U.S. concerns without publicly criticizing Trump’s host, who beamed nearby. In the run-up to the trip, a senior White House official said Trump would raise the issue of religious freedom with Modi in private. But the decision not to discuss the issue publicly repeats a pattern of Trump rarely addressing human rights issues while abroad.

The Modi government has faced considerable international criticism — including from Republican members of Congress — over its crackdown in Kashmir. The religion-based citizenship bill has led to protests across the country. On Monday, even as Trump was on his way to Delhi, violence erupted in the country’s capital between supporters and protesters of the law, leaving two dead.

The new law gives undocumented immigrants of six religions a fast-track path to citizenship but excludes Islam — the faith practiced by 200 million Indian citizens. On Thursday, the U.S. Commission on International Religious Freedom called the law a “significant downward turn in religious freedom in India.”

“You are in an India that is full of diversity where hundreds of languages are spoken and where there are hundreds of kinds of attire, several kinds of cuisine, several religions and communities,” Modi told his guest. “This rich diversity of ours, unity and diversity and the vibrancy of unity is our very strong foundation for the relations between India and America.”

The quick trip is long on symbolism and short on substance, although Trump announced new military sales. The trade agreement he said would be ready last year may now wait until after the U.S. presidential election. Trump said Monday that it is in the “early stages of discussion.”

On the first day of the two-day trip, the president and first lady Melania Trump toured an ashram where Mohandas Gandhi once lived and later the Taj Mahal, uncharacteristically emptied of tourists and glowing in the late-day light.

Although half a globe away from home, the “Namaste Trump” rally — the centerpiece of his 36-hour visit to India that also included a picture-perfect tour of the Taj Mahal and meetings in the nation’s capital — had familiar traces of the president’s campaign rallies.

Instead of red “Make America Great Again” hats, the attendees at Motera Stadium wore white caps emblazoned with the event’s name and the two countries’ flags. Trump’s signature walk-off theme, the Rolling Stones’ “You Can’t Always Get What You Want,” played as the event concluded.

Outside the stadium, Trump’s motorcade passed huge posters depicting him and Modi and a marching band on camels, along with a hastily-built barrier meant to camouflage a sprawling slum.

Inside, Trump paid breathless tribute to India’s economic rise, which includes a rapidly expanding middle class and a decline in extreme poverty.

He devoted part of his 27-minute remarks to the U.S. economy (“booming like never before”) and its military might (“now stronger than ever before”), other fixtures of his domestic campaign speeches.

He claimed 125,000 were packed into the brand-new facility and that millions were witnessing the display of friendship. The cricket stadium, the largest in the world, seats 110,000 people and organizers added seating for several thousand on the field where cricket will be played. Nearly all the sections were full when Trump and Modi arrived to loud cheers, preceded by the strains of the song “Macho Man” by the Village People.

Ahead of his visit, Trump said he expected as many as 10 million people to line the streets for his arrival, an exaggeration even in a country of 1.3 billion people.

“It is your faith in the strength of a free society, your confidence in your own people, your trust in your own citizens, and your respect for the dignity of every person that makes the United States and India such a natural, beautiful, enduring friendship,” Trump said.

He appeared to depart from prepared remarks only twice, both times to praise Modi as a “tough” negotiator.

Few expected the two leaders to ink a trade deal during Trump’s visit, and the United States and India had ratcheted up trade tensions last year as the U.S. ended preferential trade privileges for India, which responded by imposing retaliatory tariffs on agricultural products.

“I am optimistic that working together, the prime minister and I can reach a fantastic deal that is good and even great for both of our countries,” Trump said. “Except that he’s a very tough negotiator.”

Trump spent part of his speech focused on immigration and border security, proclaiming that “our borders will always be closed to terrorists, terrorism and any form of extremism” and that the United States was aggressively screening and vetting foreigners seeking entry.

He pointedly noted that his administration had been cooperating with neighboring Pakistan “in a very positive way” in targeting the “terrorist organizations and militants that operate on the Pakistani border.”

The crowd applauded loudly for that disapproving reference to Pakistan, India’s neighbor and bitter adversary, but had no dis­cern­ible welcome for his remark that the United States also maintains a “very good” relationship with Pakistan.

Trump is not visiting Pakistan on this trip, breaking with tradition for most senior U.S. officials who have made a point of not appearing to show favoritism. Trump hosted Pakistani Prime Minister Imran Khan at the White House last year, where he angered Modi by saying the Indian leader had broached the possibility of Trump as a mediator over disputed Kashmir.

In his remarks Monday, Trump said India should play a leadership role in calming regional tensions and left it there.

“Every nation has the right to secure and control borders,” Trump said. “The United States and India are committed to working together to stop terrorists and to fight their ideology.”

Yet the issue of immigration has been one sensitive issue for Indians seeking to come to the United States, as the Trump administration has cracked down on key employer-based immigration programs that traditionally benefit large numbers of Indian professionals and their spouses.

Trump said Monday that the United States and India are poised to sign an agreement to sell $3 billion worth of U.S. military helicopters to the Indian armed forces as he touted a “critical partnership” between the two countries.

Last fall, the United States and India held the first joint military exercises on air, land and sea between the two countries, called “Tiger Triumph” which Trump touted as “something to behold.” And he announced the helicopter sale agreement, which may be the most substantive policy announcement of his visit to India this week that is large on pageantries. U.S. officials approved the deal last year, and the Indian cabinet did the same last week.

Trump drew the loudest cheers from the audience when he paid homage to uniquely Indian phenomena: Bollywood movies, cricket stars, and the world’s tallest statue. The crowd clapped encouragement as Trump struggled with names and words in Hindi, including the name of a famous sage, Swami Vivekananda. Trump’s rendition omitted a few syllables.

As the crowd filed out of the stadium, there was little sense that both Modi and Trump are polarizing figures who inspire intense opposition. The fact that Trump had traveled to India, then lavished extravagant praise on the country and its leader, was a source of pride for many. They also reveled in the brand-new stadium where the event was held.

Foram Bhavsar, 45, a doctor who lives in Ahmedabad, loved the fact that Trump referred in his speech to Indian festivals like Diwali and Holi. She said that she had seen Modi speak many times, but never expected to see Trump in her hometown. “This is a lifetime memorable moment,” she said. “Perhaps we will never see this another time.”